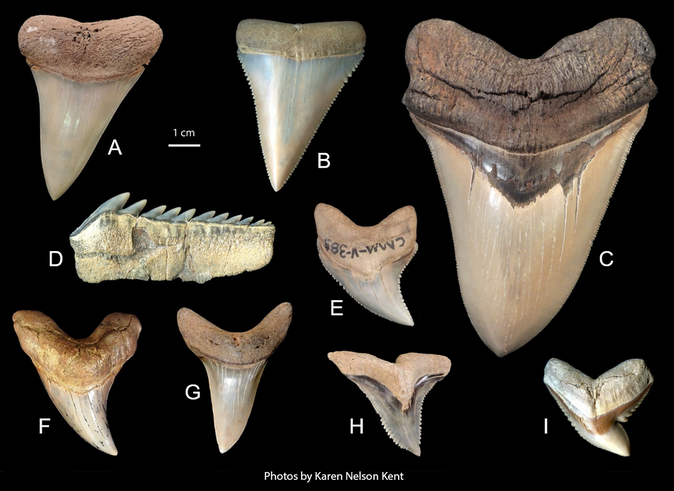 My research is primarily concerned with the diversification of elasmobranchs (sharks and rays) during the Neogene (2.6-23.3 Mya). The Neogene diversification began following a prolonged period of very low global temperatures in the Late Oligocene (Chattian) about 26-27 Mya. By the late Early Miocene (Burdigalian) global temperatures increased until they were well above those of today. This period of elevated temperatures (the Middle Miocene Climatic Optimum, 14-18 Mya) was characterized by a marked diversification and expansion of marine communities. At the end of the Neogene there was an episode of global cooling 2.0-3.6 Mya in the Late Pliocene (Piacenzian) that coincided with a major turnover in marine biotas.

During the Neogene elasmobranch faunas underwent two fundamental changes. The first was faunal modernization where middle trophic levels previously dominated by lamniform sharks with tearing-type dentitions (i.e., tall, slender crowns and accessory cusplets) were replaced by carcharhiniforms with more versatile cutting-clutching dentitions (i.e., serrated, blade-like teeth in the upper jaw and slender, erect teeth in the lower jaw). This rise of the carcharhiniforms appears to have been associated with the diversification of marine invertebrates and teleosts through much of the Cenozoic. The second change in Neogene shark faunas was a remarkable burst of gigantism in distantly-related orders, includin​g the hexanchiforms (D), lamniforms (A-C, E-G) and carcharhiniforms (H, I).

While I have done at least some work on most of the giant Neogene sharks, my most extensive research has focused on reconstructing the dentition and paleobiology of the extinct false mako shark (Parotodus; F) and the paleobiology of the extinct giant thresher sharks (Alopias; E). My research on the giant threshers includes the naming a new species, A. palatasi, with a colleague from the Natural History Museum, London. Further, I have done a significant amount of research on megatooth sharks (Otodus [formerly Carcharocles]; C), including the teeth of fetal, neonatal and juvenile individuals, the evolution of O. megalodon from O. chubutensis, and as a member of the design team for a 52-foot, whole body reconstruction of O. megalodon by paleoartist Gary Staab in the atrium of the Smithsonian National Museum of Natural History in Washington, DC.

Gigantism during the Neogene appears to be correlated with a corresponding diversification of advanced cetaceans and pinnipeds. Near the end of the Neogene both cetaceans and pinnipeds shifted their ranges to colder, more polar oceans, and the temperate-dwelling giant sharks may have been left without a reliable food base. By the Late Pliocene almost all of the gigantic sharks were extinct, and essentially modern, carcharhiniform-dominated shark faunas remained.

My current research focuses on the highly diverse shark and ray faunas during the Middle Miocene Climatic Optimum in the Mid-Atlantic of the eastern United States. Fundamental questions, such as the organization and temporal extent of different faunas and the role of the giant sharks in determining the structure of these faunas are at present very poorly known, and the goals of this research.